In 1884, the population of Jacksonville was just 10,000, yet even within that relatively small number; there were still a multitude of children in need of help. To that end, a group of church women launched the Orphanage and Home for the Friendless in a small, rented cottage on the corner of Liberty and Ashley Street with a fund launched to open a permanent home.

Then, in 1888, a yellow fever epidemic ravaged the Jacksonville community, leaving more children than ever orphaned and alone. Col. James Jaquelin Daniel, president of the Auxiliary Sanitary Association, and a well-known attorney and religious leader, worked tirelessly to combat the disease and coordinate volunteer efforts. Unfortunately, Daniel paid the ultimate price for his battle, catching and eventually dying from the disease. 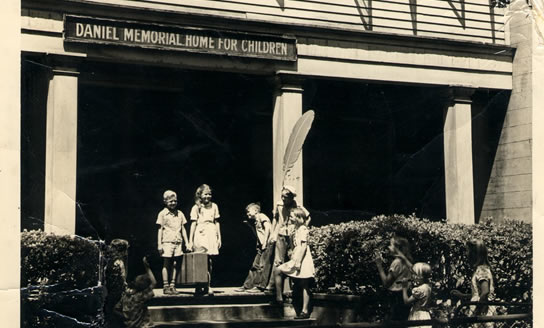 Financial contributions poured in from around the nation to build a “living monument” to his memory and the Daniel Memorial Association was formed. Daniel’s widow chose to honor her late husband’s passion for philanthropy and consolidated the Association with the Orphanage in 1891. In gratitude to the widow and respect for Col. Daniel, the Orphanage changed their name and incorporated as the Daniel Memorial Home for Children in 1893.

During the next one hundred years, Daniel Memorial Home evolved to meet the changing needs of the community, altering its name twice in the process. Yet, throughout this slow metamorphosis, this philanthropic agency, now known as Daniel, continued to honor its namesake by remaining dedicated to improving the lives of community children.

Now the oldest child-serving agency in Florida, Daniel helps nearly 2,000 children and their families each day with a wide variety of innovative and nationally-recognized programs.

A timeline of significant events in Daniel’s history: